Back in the spring, I was planning to do an article documenting my attempt at a more challenging game of Europa Universalis IV. It came about after I got the feeling that all of my EU4 achievements were ones considered either “easy” or “very easy” by the community. And so I thought, “why not try to get a medium level achievement?” An easy medium, of course, because going all-out on my first attempt at a higher level would be, well, hard. And so I picked one I thought I could do: “A Tale of Two Families”

The Tale of Two Families achievement requires you to start as either Vijayanagar or Bahmanis, the two largest countries on the Indian sub-continent at the start of the game, and completely destroy the other. You need to capture their capital and fully annex all of their land. Vijayanagar, the larger one, would probably be easier, save for Bahmanis being in central India and having more directions to go and more small nations to pick on. As Vijayanagar I would probably have to deal a bit more with aggressive expansion, which is other countries getting mad at me for growing too fast, but it still would it probably be the easier route. So I set up a plan: I would figure out my “difficulty score” for achievements, with very easy being worth 1 and impossible being worth 6, calculating the average of everything I had. A medium, worth 3, would be pretty nice to have. I currently have sixteen very easy achievements and fourteen easy ones, for an average (keep in mind I’m just making these numbers up, I don’t think the community uses them) of 1.47. Less than half the medium score of 3, kind of lame. 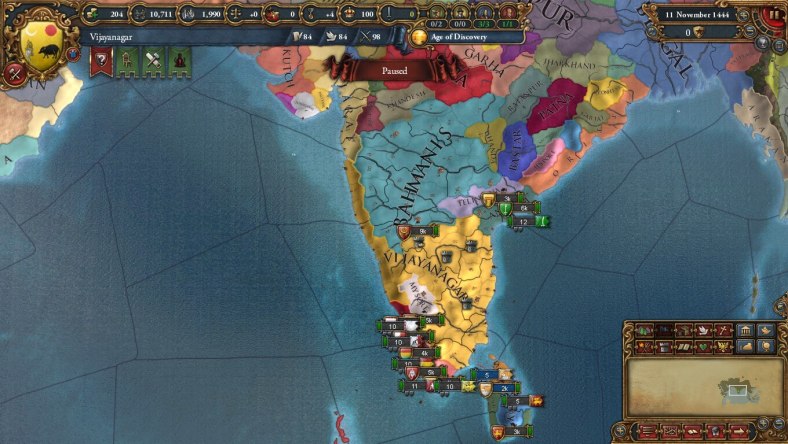 Vijayanagar is big at the start, but so is Bahamanis. Completely defeating the other is a challenge.

But achievement hunting can be hard, and time-consuming. Even if I were able to completely obliterate Bahmanis as Vijayanagar, I’d have to do it slowly. There’s a limit to what you can take every war; you’ve got peace treaties to wait out, and back to aggressive expansion, you can’t just keep picking on the same country over and over again. I didn’t play any Europa Universalis for months, because I was a bit intimidated by the challenge of the achievement. And that’s not something new, the only other time I’ve tried any long-planned achievement hunting is in Halo 3: ODST, both the original version and the Master Chief Collection version. Trying to get all of the phones in the city, I missed just one…while crossing off all of the ones on the map. Yes, I know the last one is underground, it wasn’t that one. I didn’t want to look through all of them again, so I gave up. And that’s kind of what happened with A Tale of Two Families. It would be long, it would be tough, and it would require a lot more planning than I usually do in my games. And so, I maybe tomorrow-ed it for three or four months, until I got tired of not playing EU4 any more.

Back in September, I started a new game of Europa Universalis 4. As France. Shockingly, pre-renaissance France is a pretty easy nation to play. It actually did end of being a bit of a challenge, with England getting in close with the Holy Roman Emperor all game, first Austria and then a scarily big Brandenburg. Seriously, I think they’re going for AI Prussia, which is just nuts. Before that I played a game as the Ottomans, again a very powerful and easy nation at the start of the game. EU4 starts on the 11th of November, 1444, one day after the Battle of Varna, where the Christian Crusaders were defeated by Ottoman forces. So yeah, they’re pretty strong, too.

France is powerful, and I did do okay, but England’s ally Brandenburg got too strong for someone of my skill to deal with.

Before that was a…slightly…harder game. I’d decided to try a run where I didn’t do massive military expansion, Europa Universalis is a pretty military-focused game after all, and instead do a colonization-heavy Portugal run. It wasn’t particularly hard, Portugal is still able to hold their own and has the best colonization bonuses in the game. There was still a bit of a challenge to play differently though, and to more clearly learn EU4’s trade mechanics. Even with all the videos I’ve watched on that, playing a more colonization and trade-focused game was REALLY what got me to figure that out. Which is pretty cool, and why I want to try something different.

I’ve tried harder games before, and failed miserably every time. I’ve taken three or four shots at Morocco, and gotten the snot kicked out of me by the Iberians within the first couple decades every time. I’ve tried Austria, trying to hold together the bickering Princes of the Holy Roman Empire. There I accidentally chose a female heir after a random event killed my previous heir…which the HRE doesn’t allow. I quickly gave up. I KNOW I’ll enjoy these games. Once again, that not-too-hard-but-harder-than-usual Portugal game was my favourite in recent memory. I KNOW they’re how I’ll get better at the game, again, that Portugal game did. But…the easy games are a lot of fun too. And they go so smooth and they’re so relaxing and they’re so easy to plan and they’re just…so fun. And that’s what’s important, isn’t it? They’re fun.

I know I’ll have loads of fun playing harder games of Europa Universalis 4, but I also know I’ll keep playing the easy games. And that goes for loads of other games, too. Halo, Civilization, RimWorld, all of these and more are games I play on around normal difficulty, even though I could and generally have played on higher levels. And so what? They’re fun! A small but vocal part of the gaming community can be pretty aggressive towards people who choose the easy route, but they’re just straight-up jerks. If you have fun playing a game, have fun playing that game. If you need to play it on easy, play on easy. If you need to play on very easy, guess what? Play it in the way that gives you the most fun, because that’s what video games are about, fun. 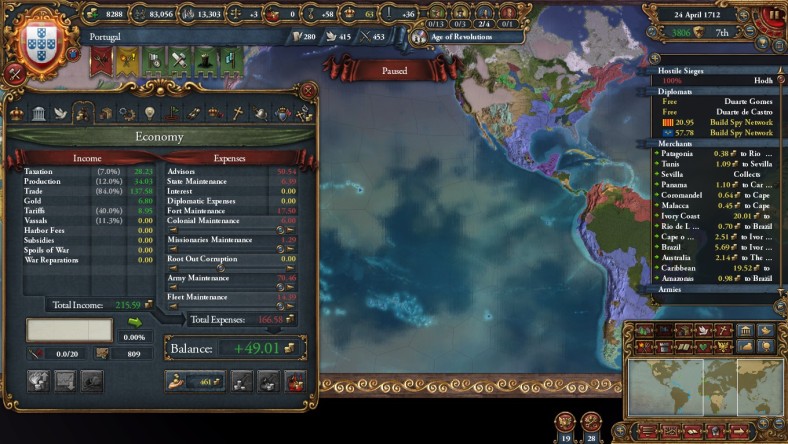 I was able to rake in the cash in my Portugal game, through mass colonization of Africa, Australia, and the Americas. Now I want to try trade game as Venice, keeping my lands small.

I used to be somewhat disappointed that I didn’t try some of the more challenging parts of EU4, but more recently, I’ve realized that’s silly. If easy stuff is what’s going to be fun, I’ll do it. I know I will try some different EU4 stuff in the future, I’ve had a list for a while. I really want to try that Tale of Two Families achievement in India, and it will probably be my next game. I want to try a Mamluk game after that, who despite being one of the more powerful nations in the world at the start, usually get destroyed pretty bad by the Ottomans. I want to try a Venice game; my Portugal game already got me good at trade through massive colonization, now I want to try trade while not directly controlling much land. I want to try a Naples game, breaking free of Aragon and forming Italy. I want to give another go at Morocco and Austria. I’ll probably do a lot better as Morocco this time, and as for Austria…well, even if I can’t get the Holy Roman Empire nations to stop bickering, I know I’ll learn a lot. Aaand…I want to play as England and France and the Ottomans and Muscovy. Yes, even with all the more challenging stuff I want to do, I still will probably throw the easy stuff in there when I want a smooth run. Because those smooth ones are still fun, and that’s what video games are about: fun. If you have fun, do it. Whichever way you want.

Do you have an internal challenge with difficulty? What do you like to play easier, even if you know you can play harder? Tell us in the comments below, or on Facebook or Twitter!