For years, gamers have dealt with microtransactions in their favorite games – from MMOs to mobile, and more recently in triple-A titles, we’ve seen additional in-game content made to generate long term profit. Some studios and publishers have made sure not to break the first rule of selling content and have limited their offerings to cosmetics and rewards that don’t grant power to players. As such, this is normally not an issue since these purchases are entirely optional and don’t provide advantages in online play, or roadblocks to story progression.

However, with the loot box dilemma recently bringing renewed attention to microtransactions in games it has driven players to question other publishers monetization systems. This has caused outrage to surface over a long-overlooked scheme due, in part, to its shockingly simple methodology.

The most recent title to draw fire over this scheme is The Coalition’s newest installment in the main story arc of the Gears of War plot, Gears of War 5, and therein lies the problem. Gamers have started to voice their concerns over the fact that these studios are clearly breaking up the main story and locking it behind multiple paywalls. Many have accused the developers of hiding behind the excuse that “…games take time to develop and evolve with each new installment.” This seems to be an ineffective defense as players are now digging up many titles that have taken up this practice in the past and are calling for some sort of change going forward. Some of the other major titles guilty of having attempted this scheme and are now being drawn into the discussion are Halo, Bioshock, Civilization, God of War, Resident Evil, and perhaps the most egregious is a title that’s been telling its last installment for decades – Final Fantasy.

Players have started demanding developers and studios stop splitting up their games just to make extra money as you can see here from twitter user @nicklendime;
“I already bought the game. I own it now. They cant charge me for more stuff they want to add. That’s there choice to make more not mine.”

And @iwantitnow41;
“if I want to play the next game why do I have to pay for it. I got it already why sell me 4 more #BuyItOnce”

The outcry has been developing into a movement and the hashtag #BuyItOnce is currently trending on twitter while some are even moving this argument into the realm of movies and books. One twitter user has called for action on the popular space opera, Star Wars. @thatsn0moon writes;
“How dare they sell us a story in 9 movies. The sequels & prequels should have only been 1 price. It’s the same star war just #buyitonce” 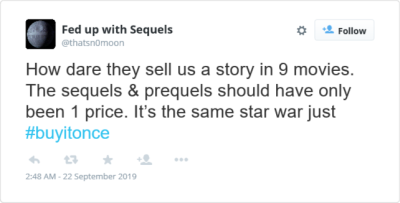 Now that the focus is on this greed-driven practice, we can only wonder how hard the fans will push for change. Maybe someday we’ll finally see all of our favorite games developed in their entirety before being released to the people, even if it takes twenty years and hundreds of millions of dollars to make the story, we’re worth it – aren’t we?

Do you purchase items from game microtransactions?
Comment and tell us below!

One thought on “Gamers Outraged Over Pricy Microtransaction Scheme /s”