This may be my first article for Novus, but if you know me from RUL, there’s probably something you know about me: I absolutely love historical strategy games. The Civilization series is the big one, but I’m also partial to the games produced by Paradox Interactive, like Europa Universalis IV, Crusader Kings II, and Stellaris. Okay, that last one’s not really historical per se, but whatever. Thing is…I’m not super great at some of them. Civ V I’m very good at, or at least I was before Civ VI came out and I was playing it more regularly. I’m not nearly as good at Civ VI, and I’m not sure I ever will be (more on that in a later article, trust me). EU4 I can do pretty well in also, but CK2? I’m less than great.

Crusader Kings is about playing as an actual person in the medieval era, rather than a country like many other games. You own a piece of land, and you do work to expand your holdings, but it’s largely about keeping people happy and working with people to grow your family’s power. You could take a piece of land without ever declaring war for it through clever marriages, schmoozing, and assassinations. Generally when I play, I do so on what the community has lovingly named “Noob Island”, aka Ireland. When the game starts in 1066 it’s full of a bunch of weak Counts and Dukes, who can become significantly stronger with a good ally or two. Grab a good partner and bam, you’ve gone from equal strength as a neighbor to twice as powerful. Take them over and you can start to snowball until you (or someone down your lineage) are a lot bigger than you were before. It’s also important to note that Paradox games generally don’t have win conditions, which means you can choose your own. If you don’t think you can beat England and simply want to unite Ireland, that can be winning for you. They’re also long, which combined with the lack of any type of real winning means people frequently quit partway through. Which brings us to my most recent CK2 game.

Starting as Mumu, a relatively strong dutchy in southern Ireland, I was doing pretty well. I wasn’t expanding insanely fast, but keep in mind that this isn’t a game about throwing your armies at your enemies without a little planning first. What I was doing was building the foundation for expansion; getting my children into strategic marriages, sucking up to the people who could help me, and planting the seeds of discontent among targets. I was doing pretty well for about a century and a bit, managing to form the Dutchy of Munster….and then some scary bad guys started expanding in every direction. They took northern Ireland and parts of Scotland. Then, they came for me. Noob Island is great because you can beat up the people around you and grow significantly stronger, but that goes for them as well. When a small guy from north of me started to grow big enough to rival the powerhouse that is England, when I had lost my freedom by the 1190s, I felt like giving up. I had dropped lots of runs of Paradox games, which like I’ve mentioned isn’t particularly uncommon. But then I thought, no. I am going to continue to play this game. I am going to rise up and give this jerk who stole my lands a beat down. I am going to be free. 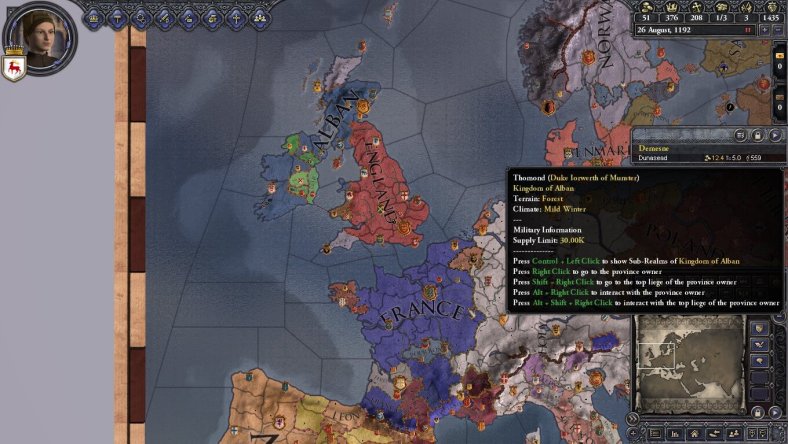 Alban expanded throughout the western British Isles, and soon formed the Kingdom of Iwerddon

It’s important to remember that in Crusader Kings, you play as a person. Your lands can be completely taken over and annexed by an enemy, and you’ll be cool. As long as you don’t die without a legal heir, you can keep on going. You might just be some random schmo, of course. Following Ireland’s takeover I was reduced to a mere Count, the lowest playable character in the game. My military was almost completely useless, in a strategic move of “don’t let my vassals get too big”, internal wars within the kingdom were disallowed. To get strong enough to make a bid at freedom, I had to find another way. And so, I got my lineage out there. I married my kids off in ways to spread my dynasty where it needed to be. I had those who were in my way discreetly (and unfortunately sometimes loudly) disposed of. Remember, CK2 is about building your family’s strength up through the generations. This game is a slow burn to victory. But it was going to be a victory, I just needed all the pieces to fall into place.

On the 1st of October 1369, I matrilineally married my daughter off to the son of my liege. A matrilineal marriage is one in which the children are of the mother’s dynasty–my dynasty. Now, no one’s going to be dumb enough to let their heir give up their dynasty, but after a murder or two I got my son-in-law into a place to take over the dutchy on the death of my liege. I also swap government types to an elective monarchy, which means I can make my daughter my heir, rather than my earliest-born son. Soon I’m playing as that daughter, with my son as my heir, and my liege’s heir. It all seems to be going great…until my liege re-marries and starts having more kids at sixty-two years of age. My heir is my liege’s grandson, and unfortunately for me, kids beat grandkids in the succession game. Throughout the next six and a half years, my liege has three children that are getting in my way, while I’m trying to off his wife to stop more from coming. Then, on the 11th of May 1394, my liege dies, and I set my sights on the kids. It took half a decade, but finally I got rid of them all. With them gone, my son takes the dutchy, he’s now both my new liege and my heir.  I had finally clawed my dynasty’s way up out of Count status and back to Duke status. 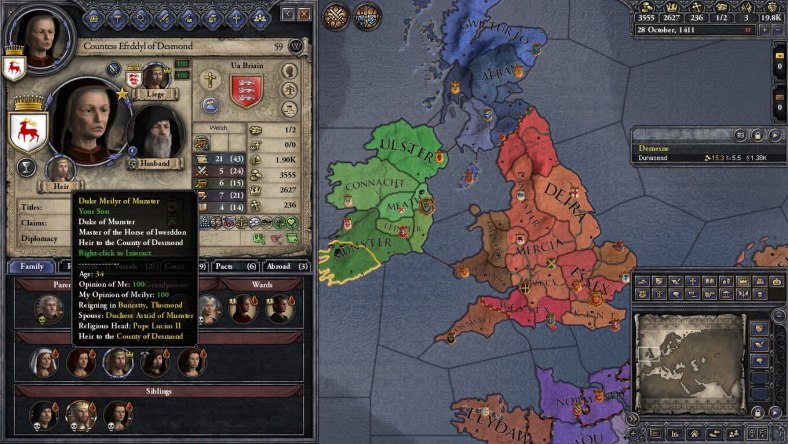 My dynasty regained the Dutchy of Munster through a lot of planning, and once I died I would no longer have to play as lowly Counts and Countesses

After giving up the ghost, I play as the son for exactly eleven months (the timing was just cruel), before he too dies in an…interesting way. No matter, my heir is old enough to take over, and I’m still passing the title of Duke on to my heirs. I had quite nearly clawed my way back up to the place where I had been many generations ago. But there was still one more hurdle to get over: I wasn’t independent. I was the same rank as before, but still had to bend the knee to the King whose forefathers had beat me down so many years ago. This was something that was going to be happen via direct war, but it wasn’t a war I was going to win. Kings are a lot bigger than Dukes, and I was vastly outnumbered in troop counts. Then, about two and a half years after regaining my Dutchy, something wonderful happened. England, the only remaining country in the British Isles, declared on my King. In another instance I might be incline to rise up and help my liege, but remember, this was a King I hated. A country I hated. And so I let the war progress, the kingdom’s solders dying in battle and the balance of power shifting in my favour. When my liege’s renaming military force was only  slightly larger than my own, I pulled the trigger. After amassing a massive war chest over the generations, I grabbed myself a group of mercenaries (super expansive soldiers for hire) and declared a war for my independence. The first battle…didn’t go great. We outnumbered the enemy by almost 3:2, but my technology growth wasn’t great as a Count, so we ended up losing to the superior Kingdom’s troops. Oh well. Whatever. I’m like…insanely rich at this point, I can just hire some more mercs and continue to throw bodies at the problem. A year and a half and a few battles later, the war was mine. After two an a half centuries of long-term planning, a few decades of knuckle-whitening planning, and just a little bit of luck, I was finally independent once more. 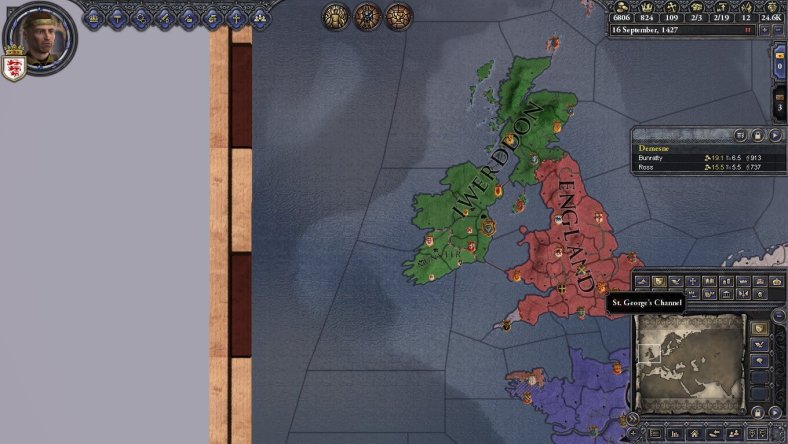 Finally, the Dutchy of Munster was free once again. Up with Munster, down with Iwerddon!

Mark the 16th of September, 1427 in your calenders, because it’s the day I won my current game of Crusader Kings 2. There’s still about a quarter century left that I could play, but remember, this is a game with no built-in win conditions. I had gotten to a place that I decided was my win–getting my freedom back. I might continue on, and hope that I don’t get re-absorbed (time to start getting in good with someone big to shore up my numbers), but I’d consider that all post-game stuff. I’d done what I had set out to do, and I’m happy with that. But what I’m really happy with is powering though the challenge of what I had originally considered a loss. Heck, if it happened again, I’d be 100% cool with calling that game a loss and starting fresh. But this time, playing through failure, I got what I consider to be my favourite game of CK2 so far. And I think that’s pretty cool.