I was…less than impressed with Rise & Fall, the first expansion for Civilization VI. I’ll probably get into it more later, but long story short, it did too much to take you down from the path you wanted to go down. I may even turn it off the next time I play Civ VI, I haven’t decided yet.

Gathering Storm, the recently announced second expansion, looks like it’s going to be a lot more fun. I suppose I won’t know if I actually like it or not until it releases in February, but until that day, I’m sitting here excited for it. I’m looking forward to almost everything, but here are some of the things that have really piqued my interest:

This is the point of the expansion, so I should hope I’m excited about it. The disasters system looks like a whole lot of fun, especially the risk and reward aspect to it. Wanting to settle somewhere safe? Go ahead, but you’re probably going to have a pretty sub-par city on your hands. Sure, that river may flood and damage some of your farms alongside it, but those farms are going to be a lot better from then on as a result of all that extra water in the dirt. That desert? A dust storm might come barrelling down on you, but Petra! PETRA!

I’m also looking forward to the chance to get to “play against the world”. Exploration is a huge part of the Civilization games, and because of that, the world has always felt to me like a big player of the games. But, it’s also…just been kind of there. You fight against the other civs, but you only ever bend the world to your will. Now, the world itself can be an ally, or an enemy. Work within its boundaries to create thriving cities or clear-cut forests and burn coal to grow even stronger, at the risk of tornadoes and climate change. Take advantage of melting sea ice as new passages open up, or watch as your distracts sink below the surface? Take advantage of flood-damaged cities to declare war, or watch as your own districts fall to the world’s wrath? It’s not just people you’re playing against any more, and that’s really exciting. 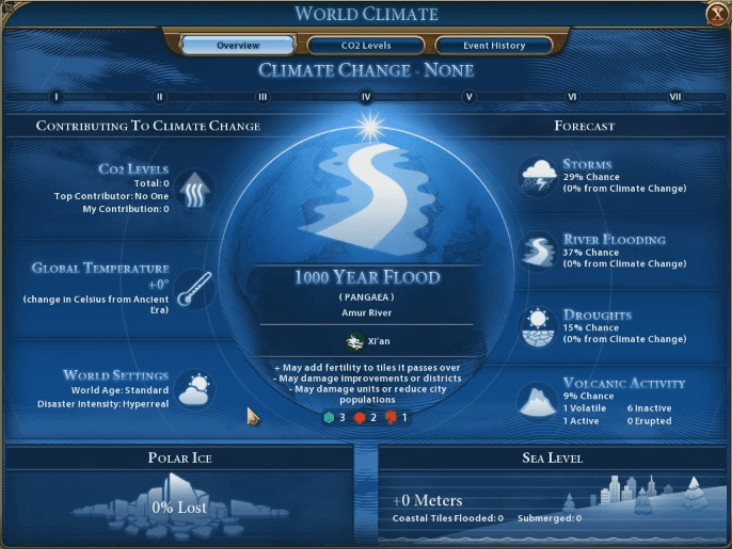 The 1000 Year Flood made three tiles more fertile, while damaging two and killing one pop. On the left and bottom we can see climate change, which has yet to begin in the Renaissance, while the right helps predict future disasters.

If there’s one thing the Civilization community likes almost as much as Petra, it’s canal cities. The ability to get from one body of water to another can be huge, especially if you can get deep into a landmass with your ships. It could be a double-edged sword, however. To get a good canal city, you had to have water on either side, and the placement could make a pretty poor city overall. Coming with Rise and Fall, canals are a district that can be placed on the map, greatly improving how both they and cities can be placed. An industrial era technology, canals must be built on flat land connected to either a body of water or a city. The team over at Firaxis even hinted at a canal-based wonder, which in part will help to create really long canal systems. They also tie in greatly with an updated trade system, where trade routes can make more money by passing through mostly water. Placement of certain canals might be relatively useless for military or movement purposes, but make you a huge amount of money with long, aquatic trade routes. Which leads me to wonder: will we be getting Venice back? Hmmm….

With Gathering Storm, we’re finally seeing the return of the World Congress to Civ. Hooray! The AI can be really frustrating to deal with in Civilization VI, and I tend to ignore them a lot more than I did in Civ V. I have both my fingers and toes crossed that the addition of the World Congress along with a few tweaks will make diplomacy much less of a headache than is has been until now.

The World Congress in Civ VI sounds a lot deeper than the one of Civ V. For example, the (generally spiteful) banning of luxury resources returns, but they can now also be promoted, doubling their yields. Decisions are passed through the Congress by each civ having a single vote, which can then be pumped up by “Diplomatic Favour”, a resource gained by things like being a city-state suzerain, holding alliances, and keeping promises. Favour can then be used in the World Congress, or traded to other civs in the game like any other resource. If you have enough favour, you can even block emergencies from being declared against you. Emergencies were one of my favourite parts of Rise and Fall, so I’m really happy to see some improvements to them. Fingers and toes once again crossed that the AI will actually take part in them, and maybe that they fire a bit more often.

Finally, we’re going to be getting a new warmonger system, which looks like a vast improvement to what we have now. As it is now, the AI can be frustratingly hard to deal with, especially if you have even the tiniest bit of a warmonger penalty. All that is being scrapped for Gathering Storm, and being replaced with the “Grievance System”. Liberate a city or keep a promise? You’ve got some positive points in the eyes of the world. Declare a war? You’ve just gained some grievances. Declare a no-CB war? You’ve just gained a lot of grievances. Grievances aren’t permanent, and you can see how many you or another civ has at any time. Depending on the era, they’ll decay at different rates during peacetime, similar to how warmonger penalties were lessened in earlier eras before. If the AI can be less hard-locked to their agendas, the diplomacy system in Gathering Storm looks to become amazing, even better than the one in Civilization V.

Canals can connect a city to a body of water, or two separate bodies of water.

One of the other annoyances (at least for me) of Civ VI was the fact that you only needed two, or even one, of each strategic resource. The way it works currently is that you can build a unit needing a certain resource in a city that contains that resources. For example, any number of knights could be built in a city with a single horse tile. If you had two of those horse tiles, you could build knights in any city. Three or more? Those additional resources would more or less go to waste, save for the additional output they gave a tile, and the ability to trade them. Even then, early resources like horses and iron are pretty plentiful, so you’re probably not going to find a lot of people who need to get them via trading. Now, resource tiles have an output, similar to gold. You start with zero, and then begin gaining some each turn once you utilize that resource. Some units will only require a one-time resource cost, while others need an upkeep every turn. Once you’ve processed the iron into swords, you don’t need to keep sending more to your units, but tanks need a constant supply of oil to keep moving.

Keeping track of resources has two really big advantages to the game overall. First: diplomacy. I’ve already gone on and on about this, but it’s such a big one. Civ is a game of diplomacy, after all. Keeping track of resources and needing more than just a couple means there’s finally reason to trade them, and use for more than the stuff you acquired with your second city. Even if the diplomacy doesn’t get any better with the additions I mentioned earlier, I can see this as a reason for the AI to not constantly be such a jerk like it is now. Second, having a finite number of resources adds an element of strategy to what you do with those resources. Will you use that oil to power your military conquest, or to power you cities? Will your solar-powered empire keep your coal safely in storage, or trade it away for vast wealth to people less concerned with climate change? Each use, trade, or abandonment of a resource will affect you, other civilizations, and even the world, something that was much less the case up until now.

Okay, so they are the only new civ to be announced as I write this, so maybe this is a bit of a cop-out. But they also sound like a whole lot of fun to play, and, fun fact, my last name is Hungarian, even if I don’t know a whole lot about the country. Hungary is led by Matthius Corinus, who ruled from 1458 to 1490. His unique ability is “the Raven King”, giving levied units bonus movement speed and combat strength, and making them free to upgrade. Levying troops from a city-state also grants you two free envoys, helping you keep a constant number of allies that can be used to merc up when necessary. Matthius’ Black Army unique unit, which unlocks with castles, pairs well with this by gaining additional combat strength when adjacent to levied units.

Hungary’s unique ability is Pearl of the Danube, giving +50% production to districts and buildings constructed directly across the river from the city centre. If you find a snaky river with lots of tiles directly across it, you can get buildings out amazingly fast, and use that extra production for more…militaristic endeavors. The country’s unique unit is the Huszár, which comes directly after Matthius’ Black Army. It gains combat strength from alliances, meaning diplomacy will not be important just with city-states, but with other civilizations as well. Finally, Hungary gains access to the thermal bath, a unique improvement replacing the zoo. It gives bonus production and amenities to cities within its range, with additional amenities and tourism if the city has a geothermal fissure.

Hungary is definitely a war-focused civ, but with an added touch of diplomacy in there. Keeping city-states and other civs happy will be the key to your expansion, and when you start to take cities, the geothermal bath will help keep them in your grasp. I usually don’t go for a domination victory, but I’m almost certainly going to go for one as Hungary when Gathering Storm releases, unless someone even more fun shows up in the coming months. With the improved diplomacy, they look like a civ that can warmonger quite heavily, while holding some political sway in the world. They’re also one that I’m sure could turtle up all game, using city-states for protection rather than having a large standing army. There will mist definitely be some upcoming civs even more heavily focused on diplomacy (we have eight more to learn about before February, plus some fairly heavy tweaks to a few existing civs), Hungary looks like it can be the best of both worlds. 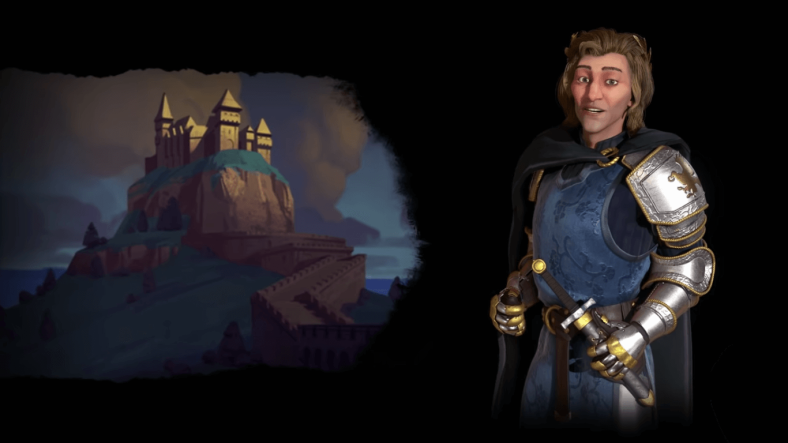 3 thoughts on “The Things I’m Most Excited For in Civilization VI: Gathering Storm”